Explore and understand the lab environment.

These first few lab exercises will be exploring the command-line utilities of the Ansible Automation Platform. This includes

Before you get started, please join us on slack! Click here to join the ansiblenetwork slack. This will allow you to chat with other network automation engineers and get help after the workshops concludes. If the link goes stale please email Ansible Technical Marketing</th>

Step 1 - Connecting via VS Code

Navigate to the network-workshop directory on the Ansible control node terminal.

Run the ansible-navigator command with the images argument to look at execution environments configured on the control node:

The output you see might differ from the above output

This command gives you information about all currently installed Execution Environments or EEs for short. Investigate an EE by pressing the corresponding number. For example pressing 2 with the above example will open the ee-supported-rhel8 execution environment:

Selecting 2 for Ansible version and collections will show us all Ansible Collections installed on that particular EE, and the version of ansible-core: 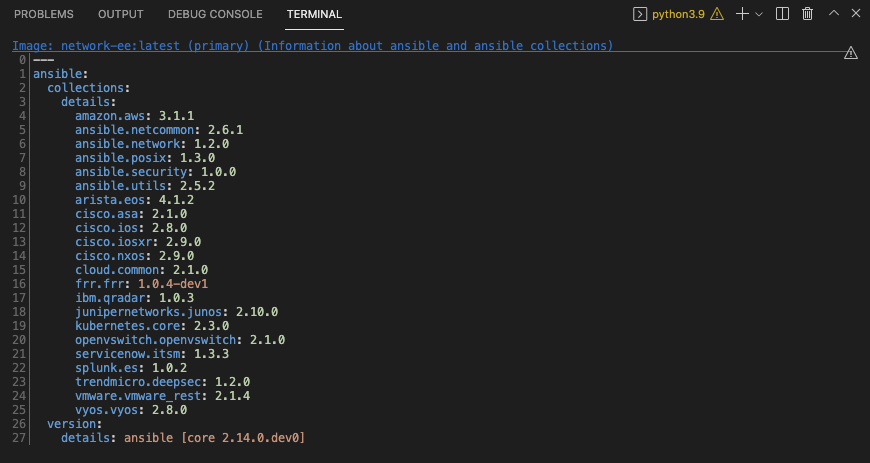 Either use Visual Studio Code to open or use the cat command to view the contents of the ansible-navigator.yml file. The file is located in the home directory:

Note the following parameters within the ansible-navigator.yml file:

For a full listing of every configurable knob checkout the documentation

The scope of a play within a playbook is limited to the groups of hosts declared within an Ansible inventory. Ansible supports multiple inventory types. An inventory could be a simple flat file with a collection of hosts defined within it or it could be a dynamic script (potentially querying a CMDB backend) that generates a list of devices to run the playbook against.

In this lab you will work with a file based inventory written in the ini format. Either use Visual Studio Code to open or use the cat command to view the contents of the ~/lab_inventory/hosts file.

In the above output every [ ] defines a group. For example [dc1] is a group that contains the hosts rtr1 and rtr3. Groups can also be nested. The group [routers] is a parent group to the group [cisco]

We can associate variables to groups and hosts.

A group called all always exists and contains all groups and hosts defined within an inventory.

Host variables can be defined on the same line as the host themselves. For example for the host rtr1:

Group variables groups are declared using the vars directive. Having groups allows the flexibility of assigning common variables to multiple hosts. Multiple group variables can be defined under the [group_name:vars] section. For example look at the group cisco:

We can also use the ansible-navigator TUI to explore inventory.

Run the ansible-navigator inventory command to bring up inventory in the TUI: 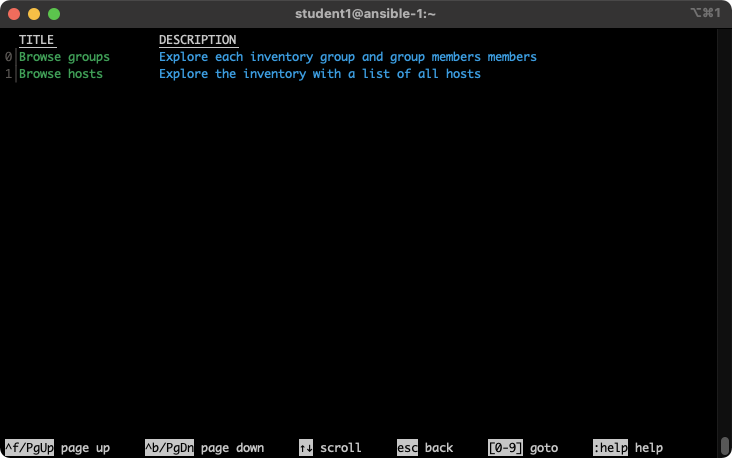 Pressing 0 or 1 on your keyboard will open groups or hosts respectively. 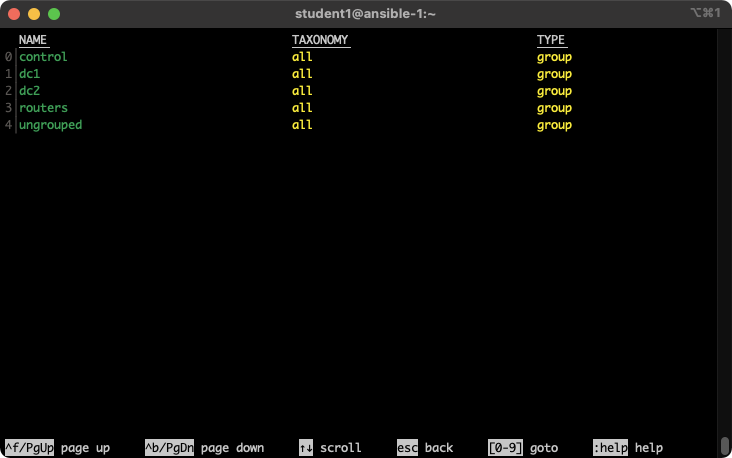 Press the Esc key to go up a level, or you can zoom in to an individual host: 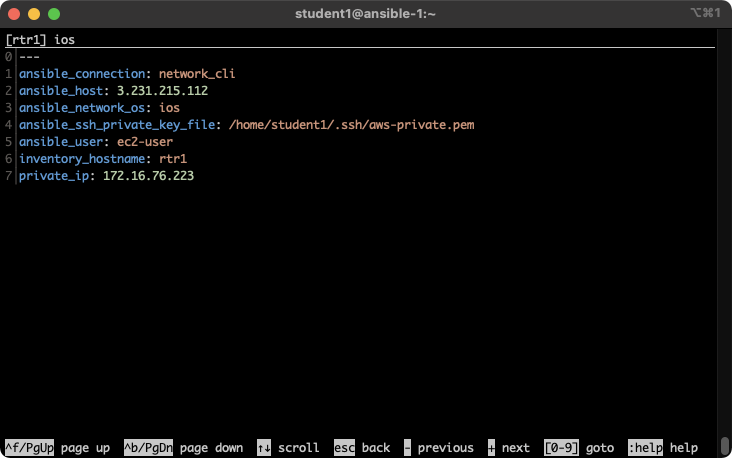 There are four routers, named rtr1, rtr2, rtr3 and rtr4. The network diagram is always available on the network automation workshop table of contents. The SSH configuration file (~/.ssh/config) is already setup on the control node. This means you can SSH to any router from the control node without a login:

For example to connect to rtr1 from the Ansible control node, type:

You have completed lab exercise 1!

Click Here to return to the Ansible Network Automation Workshop