The github.com/ansible/workshops contains an Ansible Playbook provision_lab.yml, which is an automated lab setup for Ansible training on AWS (Amazon Web Services). Set the workshop_type variable below to provision the corresponding workshop.

If you are going to use ansible-navigator and the workshop execution environment there are two (2) differences from ansible-playbook method used previously:

You need to set your AWS credentials as environment variables. This is because the execution environment will not have access to your ~/.aws/credentials file. This is preferred anyway because it matches the behavior in Automation controller.

To make environment variables permanent and persistent you can set this to your ~/.bash_rc. See Red Hat Knowledge Base article: https://access.redhat.com/solutions/157293

2. Running Ansible-Navigator from the project root

How do you use the manifest.zip with the workshop?

There are currently two ways to integrate your license file with the workshop:

The first way is to make sure your license/manifest has the exact name manifest.zip and put it into the same folder as the provision_lab.yml playbook (e.g.) <your-path>/workshops/provisioner/manifest.zip

The second way is to turn the manifest.zip into a base64 variable.

To do this use the base64 command to encode the manifest:

Take the output of this command and set it to a variable base64_manifest in your extra_vars file.

The manifest.zip is substantially larger than the tower.license file, so the base64_manifest base64 might be several hundred lines long if you have text wrapping in your editor.

base64 is not encryption, if you require encryption you need to work within your CI system or Automation controller to encrypt the base64 encoded manifest.zip.

For more extra_vars examples, look at the following:

The provisioner currently supports creating DNS records per control node with valid SSL certs using Lets Encrypt. Right now DNS is only supported via AWS Route 53, however we are building it in a way that this can be more pluggable and take advantage of other public clouds.

This means that each student workbench will get an individual DNS entry. For example a DNS name will look like this: https://student1.testworkshop.rhdemo.io

The Smart Management Lab relies on a prebuilt AMI for Red Hat Satellite Server. An example for building this AMI can be found here.

The Ansible Workshops are actually a collection. Every role is called using the FQCN (fully qualified collection name). For example to setup the control node (e.g. install Automation controller) we call the role

This installs locally from Git (versus from Galaxy or Automation Hub). If the galaxy.yml version matches your installed version, it will skip the install (speed up provisioning). Using developer_mode: true if your extra_vars will force installation every time. This is super common when you are editing a role and want to immediately see changes without publishing the collection.

If you want to contribute to the workshops, check out the contribution guide.

The teardown_lab.yml playbook deletes all the training instances as well as local inventory files.

To destroy all the EC2 instances after training is complete:

There is a variable you can pass in within your extra_vars named demo. When this keyword is defined it will install the specified demo from the Github repository https://github.com/ansible/product-demos.h

For example you can put:

Which will install all demos onto the Ansible Tower instance. Not all demos will work on any workshop_type. Please refer to the Demo repository list.

More info on what is happening

The provision_lab.yml playbook creates a work bench for each student, configures them for password authentication, and creates an inventory file for each user with their IPs and credentials. An instructor inventory file is also created in the current directory which will let the instructor access the nodes of any student. This file will be called instructor_inventory.txt

What does the AWS provisioner take care of automatically? 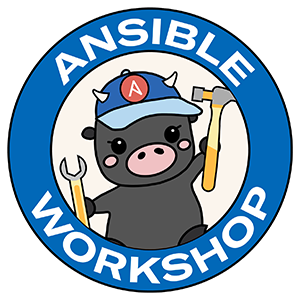