In this lab, you will log in and perform some basic configurations that will be used in later labs to perform automation tasks against your F5 BIG-IP device. This exercise will cover: 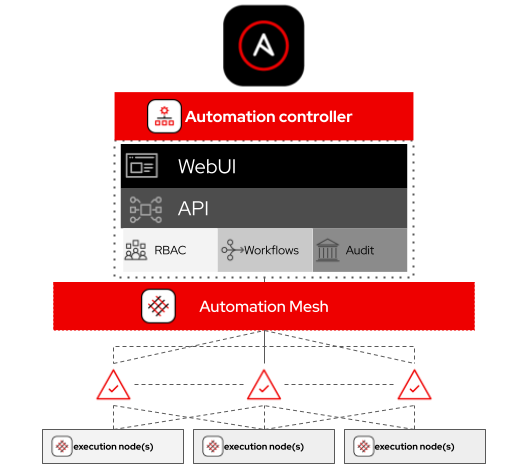 Automation mesh is an overlay network intended to ease the distribution of work across a large and dispersed collection of workers. Mesh nodes establish peer-to-peer connections with each other across your existing networks bringing automation closer to the endpoints that need it.

Automation mesh is already configured and ready to use in your workshop environment.

For example if the student was assigned the student1 workbench and the workshop name was durham-workshop the link would be:

This login information has been provided by the instructor at the beginning of class. After logging in the Job Dashboard will be the default view as shown below.

A project is how Ansible Playbooks are imported into Red Hat Ansible Automation Controller. You can manage playbooks and playbook directories by either placing them manually under the Project Base Path on your Ansible Tower server, or by placing your playbooks into a source code management (SCM) system supported by Controler, including Git, Subversion, and Mercurial etc.

For more information on Projects in Controller, please refer to the documentation

Credentials are utilized by the Red Hat Ansible Automation Platform for authentication when launching Jobs against machines, synchronizing with inventory sources, and importing project content from a version control system. For the workshop we need a credential to authenticate to the network devices.

For more information on Credentials in Automation Controller please refer to the documentation.

Templates or Job Templates define the parameters that will be used when executing an Ansible playbook. These parameters include previously mentioned features such as which project and inventory will be used. Additionally, parameters such as logging level and process forks allow for additional granularity on how playbooks are ran.

You have completed lab exercise 4.0

You have now examined all three components required to get started with Ansible Automation Controller. A credential, an inventory and a project. In the next exercise we will create a job template.

Click here to return to the Ansible Network Automation Workshop